The Tenerife composer has finished the composition and the recording sessions from Mar Targarona´s long awaited thriller DOS (TWO).

Dos is the second collaboration between Mar Targarona and Diego Navarro after the success of “The Mauthausen Photographer”. The movie, starring Pablo Derqui and Marina Gatell is produced by top Spanish production company Rodar y Rodar, and the screenplay written by Cuca Canals, Mike Hostench and Christian Molina.

The film singular premise sees two strangers, a man and a woman in their 30s, wake up in an unknown place, naked and glued to each other by their stomachs. They struggle to understand how and why they got there – becoming increasingly terrified as they discover clues and the truth emerges.

Dos will be premiered in 2021 and Diego Navarros score will have an album release. 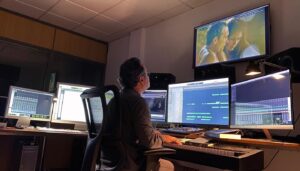